I'm not saying we don't have a water crisis here in Australia. We do. Both here and in other countries, there has been serious mismanagement and "overallocation" (which really is a PC way to avoid say

At least in my lifetime there is little chance of masses of climate refugee hoards spoiling our country. However, I do believe that there is some chance of unrest and uncontrolled migration due t 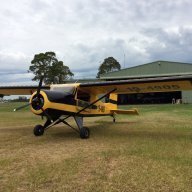 Hi Pete!   I'm sorry but I don't agree with you. The water that flows in northern big rivers irrigates the woodlands and Savannah's that photosynthesise the oxygen that people in southern st